November 09, 2013
I made this card for Remembrance Day also known as Armistice or Poppy Day. In case you did not know Scotland and other commonwealth countries around the world lay poppy wreaths at memorials on November 11th.  We also wear poppy pins as a sign of remembrance for those who died in the line of duty. The symbol of the poppy came from a poem called Flanders Fields. 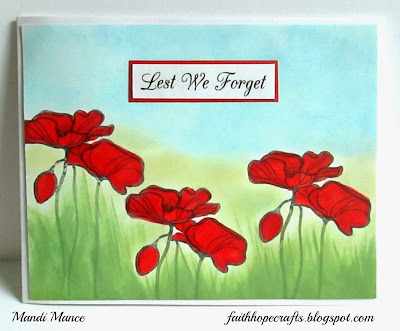 The stamp is from Unity Stamp Company called Wishing you Joy it is such a pretty flower stamp. I sponged the background with Memento inks I used Bamboo Leaves  for the grass and Danube Blue mixed with White ColorBox pigment ink to make the sky. I coloured the flowers with a Copic Cardmium Red marker I printed the sentiment from my computer.

I am entering this card into the Unity Be Inspired Challenge

Popular posts from this blog

May 26, 2017
Hello My lovelies :) Welcome to the Unity and Misti blog hop! I  hope you are enjoying seeing all of the projects so far. I just had my first wee play with the Misti tool the other day. It is a very new to me tool and wow do I LOVE it!! It is awesome! Just for the simplest of things like positioning a stamp.  One time is all you need with the Misti!! I am not one of those crafters that gets my stamped images crisp first time. I usually have wasted a card or two before I end up with a perfect image. This tool totally eliminates all of that.  Here is my very first card that I made with the Misti tool and Unity stamps.  I used a stamp called  Scattered Pieces . I LOVE this stamp and the sentiments that come with it.  I positioned the feather and the sentiment at the same time on the Misti.  I totally love that you can do that too!  It lets you stamp several at once instead of just eye balling it and hoping it works out!
116 comments
Read more

May 08, 2020
Hello Friends! I hope everyone is doing ok during this crazy time.  I just wanted to remind you that we are still running the Craft Stamper Challenges.  The May challenge is well underway but you still have time to come and join in.  Here is my card I made for this month's project.  I made this clean and simple floral card with Unity stamps.  I used two different kits to create this card. The jar with the flowers is from the  Strength & Wisdom  stamp set and the sentiment is from the kit called  His Words .  I kept my card really clean and just used my watercolors to colour the flowers and jar then tied a little twine around it to finish it off. If you have the time come and play along with us this month.  You can use any stamps you wish on your project.  Here is the prize we have on offer this month this fab Eileen Hull die.  All of the details of the challenge can be found on the  Craft Stamper Blog . Hope to see your project
Post a Comment
Read more

March 13, 2020
Hello my friends!  Welcome to another Craft Stamper Inspiration post.  I made this lovely card for my project today.  I love this  Vintage Flowers Bottles Stamp  from Inkadinkado.  I used my alcohol markers to colour it and then added some words and hearts to each of the bottles. Then I added some pink twine to finish it off.  Now it is your turn to come and join us this month in the Craft Stamper Challenge.  There is this fabulous prize up for grabs. All of the details can be found on the  Craft Stamper Blog Thanks so much for visiting my blog today. Mandi xox
Post a Comment
Read more