October 20, 2013
My new Unity stamps arrived yesterday woo hoo :) I was actually waiting on my angel Arianna Girl stamp but she has not yet appeared. So I decided to make something with the other stamps that came. I started off with the The Most Wonderful Time of the Year stamp set that includes a sleigh I love sleighs :) But I could not get my sleigh coloured the way I wanted. After 4 tries and crumpled paper everywhere I gave up and decided to change direction. So I got one of the single sentiments out that I ordered Sending Christmas Blessings I love that sentiment it is also hard to find so I am glad Unity sells it :)

I wanted the sentiment in a circle but my punch was too small so I used a candle to make the circle drew around it cut it out then put the sentiment in the middle. I wanted to make a wreath but I did not have any wreath type things to make it with. So I dug out my hydrangea punch and did the best I could. I used green glitter card to give it some sparkle. I added some red rhinestones and a red ribbon bow. I was going for the Unity colors of the month so needed something brown to add to it. I had a kraft card base that would fit in the colour scheme and added the wreath to it but it looked to plain then I thought I will try and make it into a door. 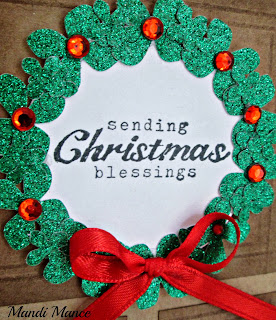 I had seen some lovely Christmas doors on other blogs and pinterest but they seemed a little elaborate for me and I don't own a die cut machine so the ones I really wanted to make I just did not have the tools for. So I figured I would do my own style I cut out a large square and 2 rectangles. I used my scoreboard to make lines around it to give some dimension. 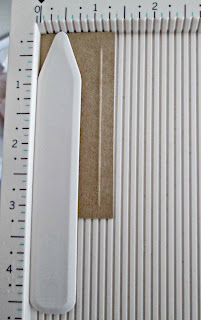 It needed something else so I sponged a around them with memento  rich cocoa ink. I glued it all together and colored in a white pearl with a brown marker and it actually came out copper so fitted as a door knob nicely.  I added the wreath and here is the finished card it turned out so much better than my sleigh did I just love it :) 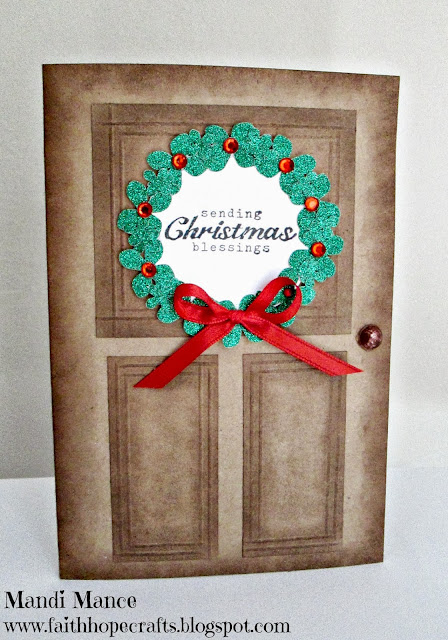 Popular posts from this blog

May 08, 2020
Hello Friends! I hope everyone is doing ok during this crazy time.  I just wanted to remind you that we are still running the Craft Stamper Challenges.  The May challenge is well underway but you still have time to come and join in.  Here is my card I made for this month's project.  I made this clean and simple floral card with Unity stamps.  I used two different kits to create this card. The jar with the flowers is from the  Strength & Wisdom  stamp set and the sentiment is from the kit called  His Words .  I kept my card really clean and just used my watercolors to colour the flowers and jar then tied a little twine around it to finish it off. If you have the time come and play along with us this month.  You can use any stamps you wish on your project.  Here is the prize we have on offer this month this fab Eileen Hull die.  All of the details of the challenge can be found on the  Craft Stamper Blog . Hope to see your project
Post a Comment
Read more

March 13, 2020
Hello my friends!  Welcome to another Craft Stamper Inspiration post.  I made this lovely card for my project today.  I love this  Vintage Flowers Bottles Stamp  from Inkadinkado.  I used my alcohol markers to colour it and then added some words and hearts to each of the bottles. Then I added some pink twine to finish it off.  Now it is your turn to come and join us this month in the Craft Stamper Challenge.  There is this fabulous prize up for grabs. All of the details can be found on the  Craft Stamper Blog Thanks so much for visiting my blog today. Mandi xox
Post a Comment
Read more

May 26, 2017
Hello My lovelies :) Welcome to the Unity and Misti blog hop! I  hope you are enjoying seeing all of the projects so far. I just had my first wee play with the Misti tool the other day. It is a very new to me tool and wow do I LOVE it!! It is awesome! Just for the simplest of things like positioning a stamp.  One time is all you need with the Misti!! I am not one of those crafters that gets my stamped images crisp first time. I usually have wasted a card or two before I end up with a perfect image. This tool totally eliminates all of that.  Here is my very first card that I made with the Misti tool and Unity stamps.  I used a stamp called  Scattered Pieces . I LOVE this stamp and the sentiments that come with it.  I positioned the feather and the sentiment at the same time on the Misti.  I totally love that you can do that too!  It lets you stamp several at once instead of just eye balling it and hoping it works out!
116 comments
Read more